Looking back at the CMS Expo & Chicago!

You probably noticed MODX was represented at the CMS Expo in Chicago, already a week and a half ago. I was there too! For me personally, this was a week of "firsts". First time on an 8hr flight, first time outside Europe and in the United States, first time visiting Chicago and first time meeting my employers (fun story).

The week was awesome.

Arriving on Saturday at 2pm (after leaving Amsterdam at 2.40pm, aint that amazing?), I was completely broken and barely managed to stay awake until 9pm which is when I hit the very comfy king-size bed at Hotel Orrington. Sunday morning I bought myself a week-pass for the public transit to head downtown... Holy cow, 45 minutes per train to get into downtown Chicago?! This city is huge! After strolling around a bit and heading for Millennium Park, it started to rain and I found my way to Panama Bread for some lunch. Back to the hotel in Evanston to check in on the folks at home, email and the social networks. By the time all that was done I headed to Austin Tacos... Let's just say America has funny tacos. :P

The next day, which was Monday, was when the rest of the MODX team was going to arrive as well as the first attendees of the conference. After grabbing a cup of coffee to-go and intending to wait for them to arrive in the lobby, the door was opened and some faces that I just knew from avatars on Skype and Twitter walked in.

How do you greet people you have never met in person before, but have been in touch with for ages and now work with every day? I think I got as far as "you guys have to be from MODX!", or something silly along those lines. Kinda weird moment, but definitely one of the highlights of the week. The day went on with a mix of hanging out, building a booth, meeting more people formerly known as twitter or skype nicknames and getting to see some American excess first-hand at a local pizza place. I also had the pleasure of meeting Aaron Ladage (/la-dag-gie/, not /la-daaj/ as I imagined) and JP De Vries as well as others  - familiar names, but new faces.

Tuesday, Wednesday and Thursday were conference days which meant lots of talking, talking and spying on..er..getting inspired by the work of other platforms represented there. I personally got to see some Wondercode (odd business model, but a real WYSIWYG editor) and MuraCMS (awesome import/export functionality and some other interesting features) flyovers as well as the majority of the keynotes in the ballroom on content management strategy and history (instead of just the tools which highlighted the rest of the conference).

There was also plenty of MODX, of course. From the showcase session to the impromptu code share meeting in a room we sort of claimed, and the MODX (and friends) meetup at a local restaurant on Wednesday where everyone was too busy chatting and drinking "Revolution" beer (I kid you not!), to think about silly stuff like food. The team also brought along "the helmet", and many attendees were spotted wearing it (on picture, too).

After more talking, demo-ing and having a great time at the expo, the Thursday ended with an open showcase where site builders could show off their sites (MODX heavily represented with some truly stunning sites), and finally the famous "gotta have it gadget giveaway". I won a laptop cooler (one of those things you put on your lap that cools your laptop and prevents burning your delicate parts at the same time), but if he had not had an early flight back north our one and only Jay Gilmore would have won an iPad3 ...!! I hope that is a lesson for one and all to not leave before the final session..you never know what happens! ;)

After all that and saying our "see you later"-s to the people rushing back home I finally got to try the legendary pizza place in Evanston with JP De Vries and Jason Sonderman, also a MODXer from Kansas, things finally slowed down.

Friday I went downtown Chicago again, this time to visit Intelligentsia Coffee for coffee geek brother Kevin, the Chicago Cultural Center for the obligatory cultural sniffing and the Sears/Willis tower - 103 floors up in the tallest building of North America.

Saturday I had to get to the airport for my 4pm-7am (local) flight back home, after which I went back to bed and woke up just on time for dinner.... The joys of a jetlag. I did manage to get some nice shots on the flight home.

Now, all this was two weeks ago. Last week I also (finally) moved, and I now have my own place (with plenty of room for receiving people) in Leeuwarden, the Netherlands. I also released VersionX 2.0.0-rc2 last night. 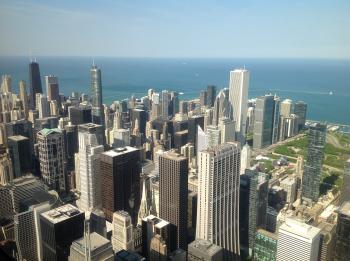 While you can view the entire 2.0 changelog on Github, here's the gist of what you really want to know right now:

VersionX is now available as a release candidate from the MODX Extras Repository, and the source as well as issues list is available on Github.

We're currently in a release candidate phase. That means I have been using it for months on my own and client sites, but that it could probably do with more real world testing and people breaking it in ways I wouldn't have been able of thinking off.

Here's some ways to help shape up VersionX: