MODX Meetups and why you need to do some too!

Last week we had a MODX Meetup here in Leeuwarden (The Netherlands), and I figured I'd write a lil' bit about it and why I think you need to host one too. I think they're a great way to socialize with people that use (or are simply looking into) the same system. Not just if you're top-notch developer, or an expert in the field - everyone who uses MODX one way or another should take part in events like this. There's something to gain in them for everyone, and it's a great excuse to have a couple of beers together!

Let me just take you through my history with meetups and what I learned from each of them.

You have to start somewhere, and this is where it did for me. Together with Gauke Pieter of Sterc Internet Marketing I organised a meetup in 't Vlechtwerk, Noordwolde. This one was quite formal with a firm schedule (that we didn't even exactly follow). There were two main presentations, one by Gauke on MODX in general and SEO, and one by myself about customizing the manager. On top of that we had a skype video call with the MODX HQ over in Dallas where some great questions were asked and answered, which was really very much appreciated - not everyone gets to talk to those great folks on a regular basis :) We finished the evening with informal chatting which was a great time to catch up with people and to exchange business cards and the likes.

Don't think it was too bad for a first time, though I do think it was too tightly organised, and that I needed to let go some more and let the attendees help build the evening more. It was great to finally meet so many people (25!) that I've known via Twitter or Skype for a longer period of time.

As I was headed for a show just across the border in Belgium, a few tweets were sent out looking for people who would like to attend (and host) a meetup in the area. The next day we had a location at Yoman's Studio in Tilburg and Jasper also offered to arrange drinks, some snacks etc. As there were literally four days between confirming the location and the planned date, there were not a lot of attendees (5), but nevertheless it was a great evening with some very creative individuals who each have their own way of working with MODX.

This meetup learned me that it can be as easy as reaching out to people in order to get a meetup going.

For the meetup in Leeuwarden, which was hosted at Grand Café de Walrus, I took a way different route compared to the first Dutch meetup. This time, I prepared nothing - no presentations, schedules etc. Just get people to come, have a drink and see where it ends up. Despite some internet issues I think it was quite fun, and with about 15 attendees there were a surprising amount of new faces. MODX is definitely growing in the Netherlands!

Now, the lack of any planning did make it quite chaotic (though there were plenty of drinks!). People sat together in small groups to discuss things together, and I think it would have been more beneficial to people to sit together and discuss things in a larger group. So next time; a general schedule to kick things off.

Now it's your turn!

MODX is growing, rapidly. Start networking, pick a date, and host a meetup in your office, a local bar or a conference centre if you fancy. It doesn't have to be complicated or hard to host one, but do start some time in advance. I'd at least give people a month or so to keep an eye out on their schedule, make babysitter arrangements or to convince their boss to pay for the traffic costs. Use Twitter (mention @modxcms and use the #MODX hashtag), Facebook (post it on the MODX CMS page, or your countrie's/state's page) and send personal emails to people you know who may be interested, asking them to spread the word with any of their contacts who may be interested too. The MODX'ers are there, you just need to put some time into finding them and having them find you.

You don't need big names, big budgets or dedicated teams to get a meetup going. Find a way to offer attendees value (provide quality content, sponsor the first drink, try to get some big names involved to speak or share experiences, give them a sponsored goodybag.. be creative) and get them interested. Often it's enough to just give people the opportunity to get to know eachother.

So. When's your next meetup? 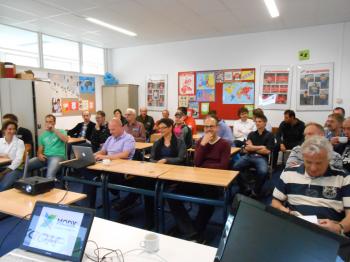 Get the conversation going, and post your thoughts in a reply.