While there is most likely a much, much longer preparation to this great news, there was a very fascinating tweet this afternoon by Digital Butter, a MODX Premier Partner based in Hong Kong, which happens to be one of my clients last summer.

In case you missed it, here's the tweet and accompanying screenshot that was tweeted:

For anyone who has worked with Media Sources before, this screen shouldn't be unfamiliar (minus that new "Dropbox" option!). If you haven't yet, however, you need to know that a Media Source is some kind of abstraction for the file tree as well as file browser in MODX. Prior to MODX 2.2 it was a pain to properly assign different permissions to different user groups, and when throwing some contexts into the mix it quickly got ugly. Now with MODX 2.2 you can create Media Sources which can be assigned to specific Template Variables, have certain base paths/urls so only certain areas of the filesystem are visible and more. However it also adds the ability for different storage systems, such as the Amazon S3 bucket which is included in the core. From the start it was clear that it would be able to offer more if people would develop the integrations. If I were to guess, a Flickr and Dropbox integration were the top two requested media source types. And, according to that tweet, we can now add Dropbox to the mix! (Don't have Dropbox yet? Feel free to use my referal link to give me an extra 250mb of space when you sign up.. much appreciated!)

You can probably imagine I got a little excited (and sidetracked from work, obviously) when I saw the tweet.. and to add to that, no more than two minutes after hitting the ReTweet button I got an email from James Bodell (lead Digital Butter fella and a great guy in general) titled "give this a spin", complete with a beta version of the package attached. Wicked!!! And so, I went off to investigate and see just how complicated it would be to get Dropbox integrated into my local test install. Turns out, it aint too bad but is frick'n awesome!!

How does it work?

After installing the package, there's a few steps you need to take.

And that's it, and it doesn't take more than a minute or two (and adding some files to your new Dropbox/Apps/Name Of Application/ folder and letting that synchronize to the web) to end up with Dropbox integrated within MODX seamlessly. 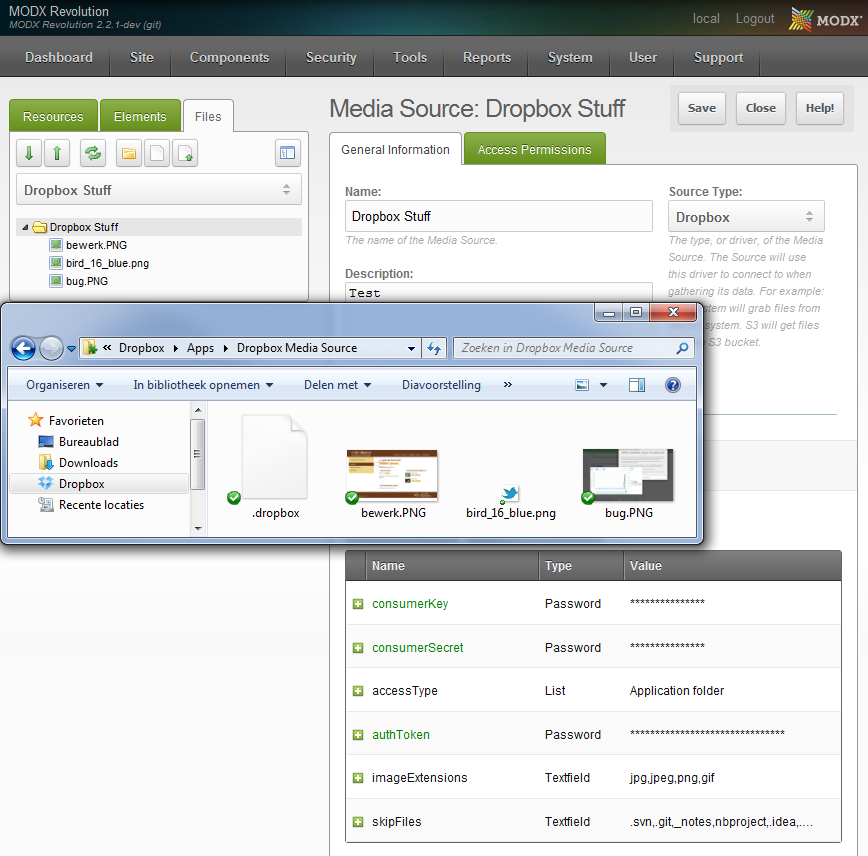 As with other Media Sources, you can restrict access to the Media Source through the Access Permissions tab so you have full control over who can access is and who can't.

To use your Dropbox Media Source, it's probably easiest to drag and drop from your Files tab to the content or where-ever you want to use your Dropbox files. For example, if I wanted to write an article about some crazy bug I found, and I added the screenshot for it to my dropbox's app folder, I can write my content and drag the bug.PNG file to where I need it to appear. It will automatically get the right link which routes the request through your Media Source configuration and returns the proper file.

Which results in your image being displayed as normal... 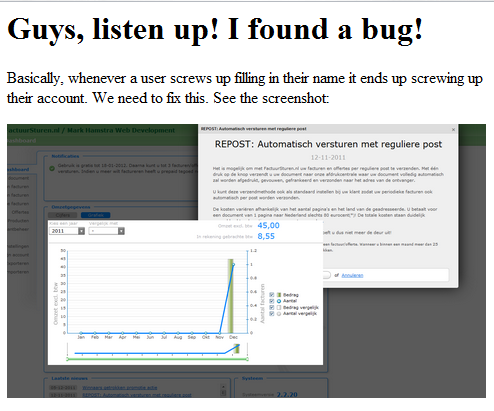 James told me they are not ready to publicly release it yet as the amount of support requests and bug reports coming in would be too much for them to handle right now, and instead they are having the team and friends beta it for a bit. I'll definitely be playing with this some more, and hopefully this will see a release for others soon. You can however find a package and the source on Github.

Now, I don't know about you, but I think we owe our Hong Kong MODX Development friends a round of applause for making this happen!

This is awesome. Anybody know if anyone is working on something similar, but for RackSpace Cloud Files? (similar to Amazon S3)

I'm not aware of a Rackspace Cloud media source in the works, sorry!

I might just have to start working on that myself. I just started testing out Revolution on RackSpace Cloud and performance is great, making RackSpace Cloud Files integration that much more appealing.
That said, I'm curious and eager to get my hands on this addon so I can study how they went about adding a custom Media Source.

And the source can be seen (though you probably guessed) here: https://github.com/digitalbutter/DropSource

Now I'm also finding myself wondering if we will see a Media Source for Firehost CDN.

There is Swift (OpenStack Object Storage) add-on which will work for RackSpace http://modx.com/extras/package/swiftmediasourcetype