Hello! Welcome to my humble web presence. I'm Mark Hamstra, 31 years young, wearer of many hats at modmore, resident of Leeuwarden, the Netherlands. Most of my time is spent building and maintaining awesome extras and tools at modmore, but I also love gaming, cooking, and my dogs. More about me.

This site is where I share thoughts, cool projects and other oddities related to MODX, xPDO and ExtJS. I also write about MODX regularly over at MODX.today. Sometimes I post three blogs in a week, sometimes there's nothing new here in a year. Read a random article.

When using the media sources API in MODX to upload files, you might run into issues with files being renamed on upload by plugins like FileSluggy and filetranslit. We did at modmore. We finally found a fix for our extras, and would like to share the solution with others who might run into the same issue.

MODX Revolution 2.5 is out! The first pre-release was released last night, and we'd like to give you a walk through of what's new and improved in this release.

Built out of the need to standardise, Alpacka provides common utilities for developers building extras for MODX. It contains common utilities, varying from parsing chunks to context specific settings and sanitising file names.

I'm one of the six Core Integrators that have been tasked with merging pull requests on the official MODX repository. Lately I've been slacking a bit (no pun intended) as there's been so much happening at modmore, but this month I'm going to do my best to catch up.

Inspired by yearly initiatives like 24 Pull Requests, I'm doing my own variation on that this year. Rather than contributing a pull request every day until Christmas, I'm going to try to merge (at least!) one pull request every day, starting today. There were 66 open pull requests this morning, so there is plenty of good work by others that deserves to be included in upcoming releases of MODX. Theoretically, in 24 days we'll be down to 42, but maybe some of the other integrators like the idea and help bring it down further, hint hint!

Got really excited to start!

Down to 63 because JP sent another pull request!

64 pull requests total today, it's going to be hard to get the number down if we keep getting this much new contributions.

Down to 61 open pull requests!

Down to 58. Also sent two pull requests fixing issues introduced in the mobile-friendly improvements in #12776: #12798 (ensuring compatibility with custom manager themes and #12799 (fixing scrolling on large displays - whoops), so back up to 60 open pull requests total now.

Also sent a really important pull request (merged by Mike within the hour), and a second pull request related to the travis tests as well.

To make it up with you for missing a day, here's a couple more merges into 2.x for the 2.5 release:

After a week of this project, there's now 58 open pull requests. I'm very pleased to see the constant flow of contributions that are being sent to MODX from a range of contributors. At the start of December there were 66 open pull requests, and despite merging 16 of those myself (and several more by other integrators) we've only gone down 8 pull requests in a week. That's equally sad (I was hoping for a larger decline after 1-2hrs of work every day!), but also amazing that we can count on so many contributions from people that genuinely make MODX better.

I've been trying to merge more than one per day as we have so many great contributions pending, and it's really quite a bit of work to stay on top of things. Not every pull request is always ready to get merged, which means that before you get to one that is ready to go you've already spent some time going through the list, reviewing code, figuring out if it's a bug fix or improvement (which can be a very fuzzy line!) to know what branch to merge to, checking for signed CLAs and proper processes, before even getting to the git magic, testing and determining if it's merge-ready. If you'd like to help out make it easier on the volunteering integrations, you can help out with code reviews, making sure people use the right template in pull request (or at the very least provide all relevant information so we don't have to ask) and of course testing out pull requests (especially larger ones) and commenting your findings. That will help integrators spend more time on actually integrating, which will help MODX become better more quickly.

At the moment, it looks like both 2.4.3 and 5.3.0-rc1 could be coming before the end of the year, but there's a lot of pending improvements that would be great to get in. With a bit of help, I'm sure we can get a lot of those merged in to make some really great releases. 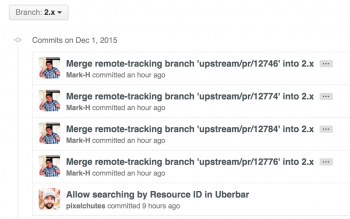 Why isn't MODX more popular? Why is it that WordPress has over 20% of global market share, but most agencies or designers have never heard of MODX? And what can we do to grow the MODX community?

What do we know about MODX 3 so far?

Over the past few weeks, lead architect Jason "opengeek" Coward has been sharing his vision about the future of MODX on Medium. Based on that, and other discussions, what do we know about MODX 3? What is its status, and when can we expect to see something?